This past Saturday was the 1st anniversary of a wonderful shop in the little village of Havelte. The shop In Den Uylenbal is full of wonders this time of year. The owners Lejo en Christy are such nice people too. The shop was all decked out for Christmas. It was nice to walk from room to room and I must admit that I do so a couple of times. I found a nice addition for my decorations at the cottage which you can see how I used on the photos. 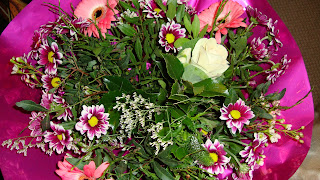 Later in the afternoon, we drove out to the garden nursery that we regularly buy from to get something for on my table by our front door for the Christmas season. The two ladies who work at the cash registers were there and one found me as I was searching for plants. She said it had been so long since she saw me and was everything okay. Then she ran into Jos who was still out in parking lot as she helped an elderly couple take their things to the car where she talked to him. When I went to pay for my plants, she walked away for a moment and then back to the cash register with this bouquet of flowers. She said it was from them all there for all I have been through this year. Wasn't that incredibly nice of her?

Now this morning, I am laying on the couch after just returning from the oral surgeon. My tooth has been removed and the infection cleaned up. I am hoping it won't hurt too badly when the shots wear off. He gave me four of them to be certain I would not have pain while he was working on it. I am already starting to get a swelling the size of a walnut in my jaw so I am afraid it is going to be baby food for the coming week. Jos bought me a chocolate milkshake on the way home which I am slowly drinking for lunch. What a start to the week don't you think? I have learned my lesson that if I don't trust a dentist then I need to make him stop and seek further help. There was a needle sticking out of the tooth when it came out. I don't think that was part of the root canal? I have to ask my dentist yet since I forgot to ask the surgeon by the time he was done with the procedure, but I think my dentist's guess that a wire or needle had broken and was left in the jaw was correct. He thought this was perhaps what caused the infection. It has been four years of having pain and the infection causing an abcess. Glad that is over with and now my new dentist can make a bridge.

So today will be sitting wrapped up in my mother's afghan with a book or some stitching. What are you doing this Monday?
Posted by Heidi at 2:42 PM

I am going to a movie (Blindside) with my cousin. That is a heck of a lot better than what you are doing. Gees, I cannot believe some idiot left a needle in your tooth. You should have stitched your own jaw, obviously, that guy doesn't know how to sew if it already broke loose. I am very happy I AM NOT THERE. I would sock them. Milkshake is good, good job Jos. He takes care of you .
Love you, Mom
PS: I love the wooden shoes at the heading.

My goodness, Heidi, a needle left there for 4 years! That man should end up in jail!!! Horrible. I have no words for this. Well, I have actually (in Dutch or English, even in French and German), but I think it is good I don't write them down.
As said: I hope you will recover soon now and have some comfort in stitching etc.

What a lovely thing for those people to do... give you a bouquet!

But what a horrible dental experience.
"my dentist's guess that a wire or needle had broken and was left in the jaw was correct."

4 years! Didn't anyone X-ray it, when you started having troubles? Wouldn't an X-ray have shown the wire or needle left behind??? And saved you 4 years of pain?

Flowers are so in the right home right now. WOW!!, That is exactly where i was afraid to. Something left behind.And why not a x-ray. I have to say to my dentist, skip a year of x-ray's. I hope you will feel a whole lot better now.
Hugs

I am so glad your dental treatment was successful this time. Four years of pain and infection is awful. Now you enjoy ice cream and milkshakes for a couple of days!

Oh, Heidi, how awful! Hopefully you will heal up quickly and have no further problems. Get some rest.

I'm sorry to hear what you have been going through. It sounds awful and unbelievable for a dentist to leave a needle in there. I hope you will be feeling better soon and can put that ordeal behind you.
How nice of the ladies at the nursery to give you the beautiful bouquet. I would agree that after all you have been through you could deserve them.

Heidi,
What lovely and tantalizing little glimpses of that amazing shop all decked out and ready for Christmas. I feel like a little child looking in through an inviting shop window and wish I could just step into the pictures and see everything close up.

I'm really glad the dental experience is behind you now but, I definitely think the previous dentist has a lot to answer for especially as it looks as if it was his negligence which caused this problem,

Never mind, some quiet resting time will help aid your recovery and, if chocolate milkshakes are on the menu then I don't think convalescing will be too hard to endure :>)
Warm hugs Angela