For six long years, Jos and I have viewed many houses and apartments in order to move from where we live now. In that time, we continued all the work we have done in our current house thinking it would increase our pleasure here and hopefully be something a potential new owner would like too. I was convinced it was never going to happen! About six months ago, I said we needed to stop looking for a bungalow style house which we could not afford in the size we want or an apartment as we are not ready to go that route. We decided to look at some houses with garages that we could convert to a studio and later bedroom when my health is worse.

Next problem is I want to live in an older home with lots of character but Jos wants a new build that is well insulated and not a problem with noise from neighbors in the home. You see for those of you in other countries, Holland is a tiny country where land is a premium. We have to rob a bank to buy a free standing home in this area of the country or buy one that is falling apart. Now since Jos is not a DIY kind of guy, this was out of the question for him. We currently live in a row house which we love inside but cannot possibly create the extra space we want.

We finally found a house. Actually, we bid on this house a year ago and were flat out refused. It is a house in the same neighborhood we live in now and is only two streets away from here. It is 15 years old but needs work done to it as the owners have not kept it up while living there. And here it is... 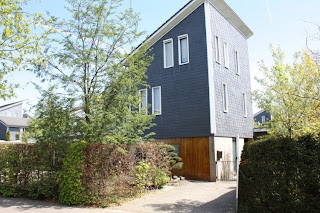 We were busy arranging to buy this house (photo below) that is being built at this moment. It has a thatched roof and I feel in love with it the minute I saw it. It has a garage we can convert but is not large and cannot be extended. Jos was doing figures over the costs of this house and the one we bid on a year ago which was practical for us. He called the realtor and told him we had to know fast if they would reconsider if we increased our bid just slightly. 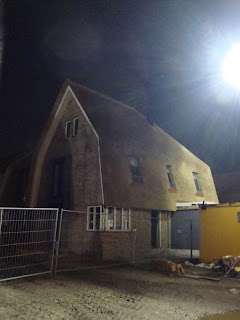 It was a matter for us of letting our hearts or our heads win. Heads won as the realtor called and said that they would now except the offer. They had just purchased a house themselves after three years of trying to sell this house, they wanted to move. (My friend Sonja will be relieved as she was concerned about the fire risk of thatch.) 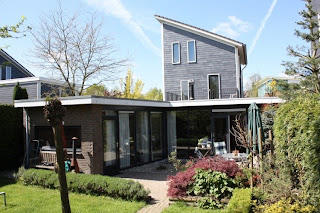 The back view of the house shows how large it is! It is the size downstairs of many apartments here. It has a very large living room, a bedroom and a studio all on that level. My mother will now have her own floor with one large bedroom, bathroom and roof terrace when she visits. I can see her grinning from here. Best of all, it was in our budget even with all the work that needs done! 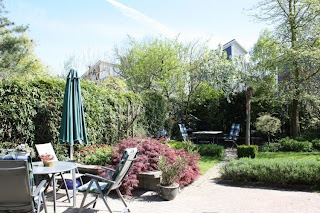 For our city, this house is on a large plot. For American standards, it is a tiny garden though. We have space to finally park both cars in our own driveway and a garden we are looking forward to getting started in. 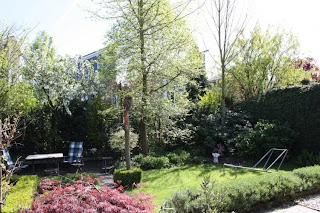 Now comes the next phase. We must get this house up for sale. I am saying lots of prayers that we find a buyer quickly although we are prepared for it being 2 years for a sale. This type of house is not selling since the financial crisis started. They are a good deal for the money as this house is very spacious inside. This was one of the reasons we had difficulty in finding a new home that was the size we needed. But fingers crossed all the hard work on making this house a home will pull as a new buyers heartstrings.

I hope to be less quiet now that this is behind us. I have not been online to visit you all at your blogs. I am going to make an effort to get around to you all this week. Thanks for staying with me when I was not around as much!
Posted by Heidi at 11:40 PM 33 comments:

Well, yes it was a sunny day outside, but I have the sunshine inside. I rarely go to the thrift shop. I never find things like others do so just never take the time anymore to go. But last Saturday, Jos asked if I would like to pop into the thrift shop to look on the way to the grocery store. Little did we know but they were have a brocante market that day. I found two things. I will share the second one later but how is this for sunshine? 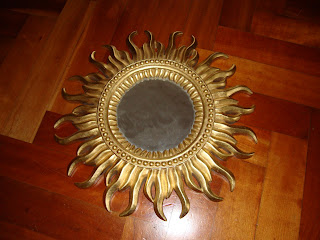 There was a woman bringing items out on a trolley and I saw her pick up this gold sun mirror. I followed her to where she put it down thinking it was going to be very overpriced. To my surprise, it was only 2,25 euro so I grabbed it up. I knew it would look so nice if it was black. We brought it home and got out the spray paint and... 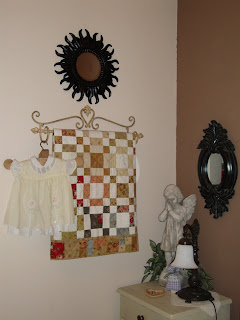 Spring is in the air!

Yes, there is definitely something in the air! It could be the pretty Tete-A-Tete daffodils I received from Caroline when she visited me... 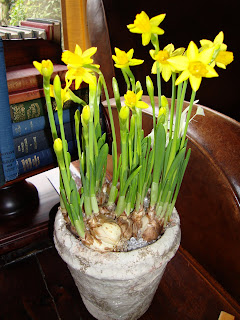 It could be the dinner we had last night when I made a bowl of mushroom, leek and broccoli risotto with old Gouda cheese... 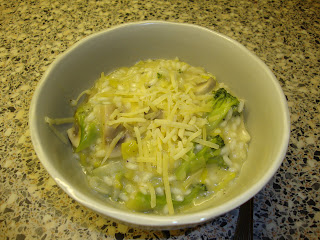 It could just be that Mother Nature has sent out her fairies to start working their magic on the earth...


Enjoy! Be sure to turn my music list off in my sidebar so you can enjoy the music with this video.

Wishing you all a Happy St. Patrick's Day tomorrow!
Posted by Heidi at 8:17 AM 8 comments:

It is evening and this is the time when a room can change and take on a special glow. I have often been asked by Dutch friends how I can stand to make my bed with all my pillows. I think your bedroom should be your sanctuary. To me that means keeping things around me that I love and make me feel at peace. 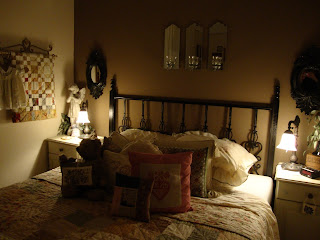 So my bedroom has many pillows which I have always found comforting. I happily make my bed each morning and replace the pillows again. I find it a good start to my morning. Life is in the details. 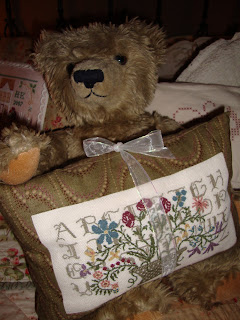 My bedroom is not a showplace like you see on many blogs. I love my simple homemade patchwork quilt which has developed a beautiful old look as it has been washed. My bear Bronwyn holds a sampler pillow I stitched. 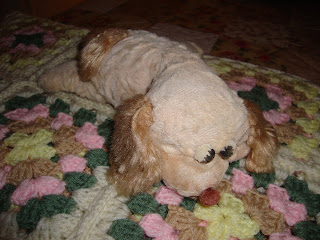 This cuddly dog was a gift from my Aunt Janey when I was only 3 and had to have my tonsils out. I still have him all these years later and could never miss him now. I cannot remember this not being on my bed throughout my life! 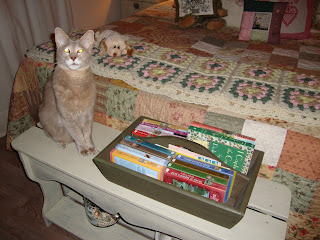 Dagi is my living cuddly toy! He loves to snuggle up with me when I go to sleep. A granny square afghan my mother made for me to throw over me if I get to chilled. No television in our bedroom. It is supposed to be a place of rest but I do like to read in bed. 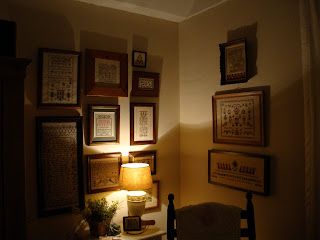 My reading corner takes on a pretty glow at night with the lamp shining on my sampler walls. I love waking up to the vision of these stitched pieces.

Is your room a sanctuary? If not, look around and see what you can place in your room to make it a peaceful place. It doesn't need to look magazine perfect but does need to feel comfortable. If not, you may suffer these words by William Wordsworth...

"Even thus last night, and two nights more I lay,
And could not win thee, Sleep, by any stealth:
So do not let me wear to-night away.
Without thee what is all the morning's wealth?
Come, blessed barrier between day and day,
Dear mother of fresh thoughts and joyous health!"
Posted by Heidi at 11:28 AM 19 comments:

After missing many weekends up at Cranberry Cottage, we are finally going again. It has been a combination of the winter weather, my medication affecting me and Jos' work that has kept us from going up lately. We went for a day at the beginning of February to find our dirt road packed with a thick solid layer of ice. It was impossible to walk on the path without major risk of falling. 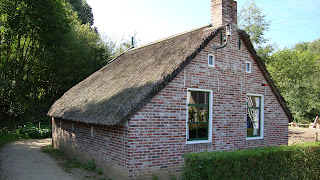 I thought it would be fun to show a Cranberry Cottage of earlier days. This 'bos hut' or wood house is in the Dutch open air museum. It was originally near where our new cottage was. I just love the look of this place so let's go see if we can look inside... 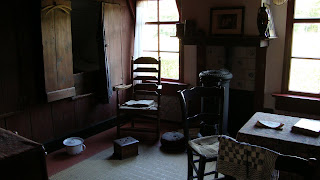 The cottage has a single small room for living space. The wood stove keeps it amply warm. There are chairs around the room but no sofas for these poorer families. A foot warmer sits in front of one of the chairs. You simply add a few hot coals in the carved wooden warmer and place your feet on top. They have a 'bedstee' which is a bed in a cupboard in the wall. It is not long as they believed you must sleep sitting up in order not to drown in your own body fluids. 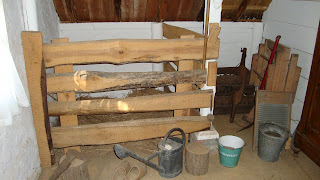 Space for a sheep or pig in the entrance to the little closet. 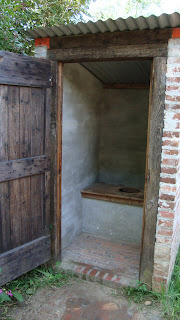 And conveniences in the form of this brick outhouse. I must admit that I would enjoy going back in time to experience the life and its hardships. I would choose various times as I think it would be fascinating to see how people adapted in their various times. 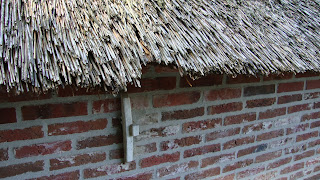 Have you ever wished you could go back in time? Would you only want to see a certain time period?

I hope you have a wonderful weekend. I am off to say hello to all the birds at our cottage and enjoy some peace and quiet away from the city.
Posted by Heidi at 1:20 PM 18 comments: