On the first floor of the tower of our home is the guest area. I showed you the bathroom earlier. I use it as I enjoy a bath but this is actually the bathroom for the guest room.
The photos can be enlarged by clicking on them..... 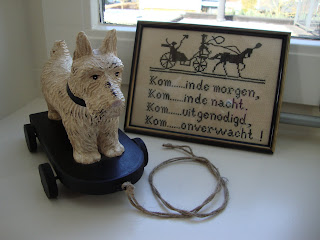 Our guest room has windows on three sides since it is in the tower. This means the room is very light. I wanted to give the room a warm and welcoming look so choose a warm dark beige for the walls. I was so grateful when we were busy with the house to have help from my friends Silvia and Carolien when we were painting this room. 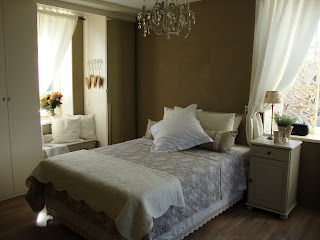 There are built in closets in the room and when we placed the furniture in the room, I discovered the bench I use at the end of the guest bed fit just perfectly in the space between those closets where the window is. It gave the room an instant window seat. 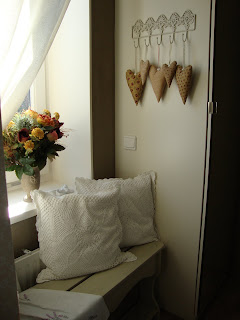 My miniatures and silhouettes and hanging once again. I added a few more since the previous house and just love this wall. 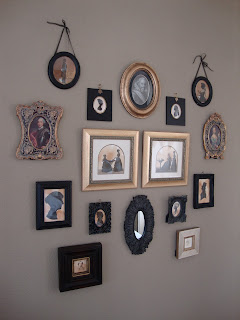 There is a reading corner here from which I can also sit and see the silhouettes. Sometimes, I relax with my current book here after having taken a bath. 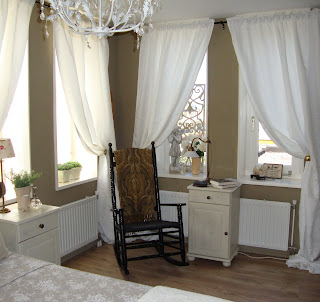 We have two mirrored doors on the closets and two regular doors. Instead of painting them, we wallpapered these two doors. This was wallpaper I had left from lining the back of our hutch to lighten it up. That reminds me that I must share that with you soon too. This wallpaper is a Swedish reproduction wallpaper dating from 1902. The moment we saw it at the shop, Jos and I knew it was the one we wanted to use as it reminded us both of living in Stockholm. The inside of these doors is also wallpapered with the paper left from doing the sampler wall in our bedroom. 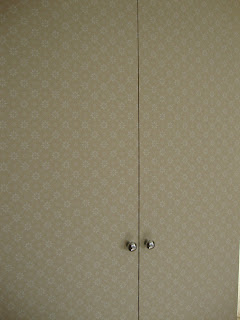 While my mother was visiting, she commented that she would like a mirror at this spot. We had this mirror still to hang so used it here along with an antique Swedish sideboard. This sideboard design is attributed to Karin Larsson. It is even held together with wooden nails. I would love to paint this to match the other furniture but am not sure about doing so with this antique piece. 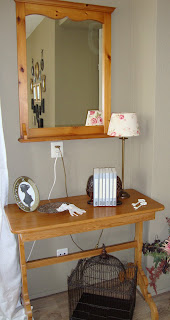 There is nothing that makes a home more personal that little touches that say who you are. I included this silhouette of one of my favorite authors, Charlotte Bronte, and the lace gloves I wore when Jos and I got married. 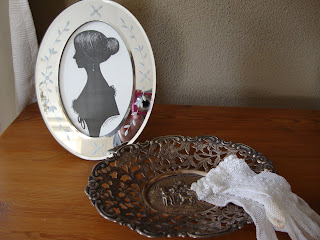 I do not have very many but I love collecting Persephone books. 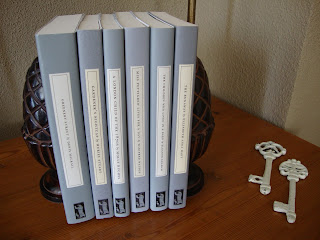 The windows in the tower are very deep which gives me lots of wonderful space to create vignettes on the window sills. Not having had window sills in our previous home, this is so much fun to have them here. 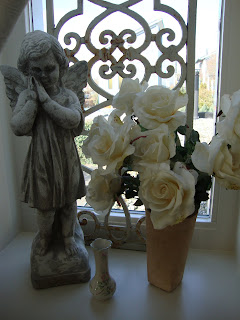 Jos and I get comments about the guest room being bigger than our bedroom downstairs. We keep saying we will be guests in our own house once and sleep up here just for the fun of it.
Thanks for being my guest and visiting our home.
Posted by Heidi at 10:39 AM 25 comments:

Spring is arriving and nature is bursting out ready for another year of color and splendor. Everywhere in Holland, the bulbs are either in bloom or growing forth. What a pretty time of year... 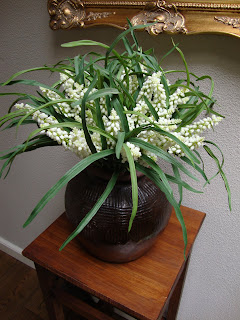 My white grape hyacinths in a vintage olive pot...

"The year's at the spring
And day's at the morn;
Morning's at seven;
The hillside's dew-pearled;
The lark's on the wing;
The snail's on the thorn;
God's in His heaven -
All's right with the world!"
~ Robert Browning
Posted by Heidi at 5:57 AM 13 comments:

It is the start of the gardening season. Our frost is gone with the exception of on and off light night frost so we could start in our front garden. It had been left as is for 16 years. It was a hard and compact ground covered totally with moss. In fact, we discovered there were many flagstones under all the moss which could no longer be seen. We first removed all the flagstones and Jos loosened and turned over the soil. We moved plants around and disposed of ones that were just left dieing as they were choked in the hard soil. 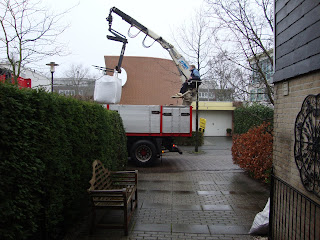 We removed all the old white gravel and used it along the side of the garage which none was left over the years. A new and wider path was created using the flagstones to separate the garden from the path and went to a farm out in the countryside who specializes in various gravels and split. They said since we were early in the season, they could deliver it the next morning. The guy told Jos that last year, he was making on average 100 deliveries a day in season. That is due to their great prices of course. It was fun to see how he could use the crane to place the 'big bag' wherever we needed it even though it is a tight squeeze for a truck in these little Dutch streets. Notice his wooden shoes? *wink* 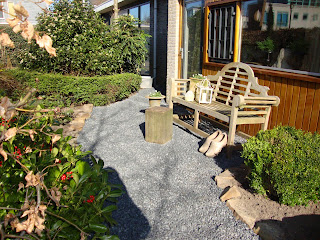 After looking at the many types of split, we decided on basalt which is a stone that is dark grey but turns black when it is wet. 1500 kilos of basalt was delivered and we needed about 1200 for the front saving the rest for something I want to do in the back garden. We are both really happy with how it turned out. 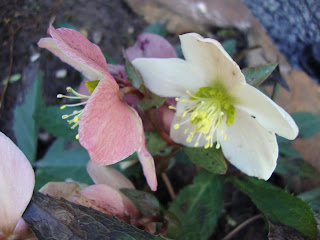 Planting is sparse until I start buying some things but this hellebore was there already and really showing off in the spring sunlight. What pretty centers these have! 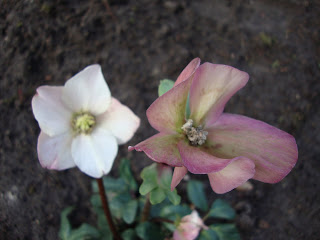 I did plant up two new types of hellebores including this one. I could not resist it when I saw that it is called 'Christmas Carol'. It is not as pretty a flower center as the other but still beautiful. 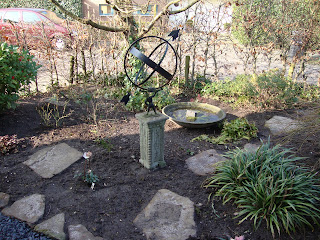 Our sun dial takes center stage in the front garden. We discover four little rose bushes among the plants and replanted them together. I have no idea if they will make it but there is a little new growth coming on the already. We also rescued dieing boxwood from the back garden and created a large ball in the front. It hopefully will take on a new life there.
We plan to use our garden gate at the end of this new pathway and Jos will place it before our driveway is rebricked. You can see our gate here from a blog entry when we lived in our previous house. The beech hedge will then continue on the other side of the gate so we have to add two more beech hedges to the other side. In the second photo, I am standing where the gate will be. There is still much work to do as you can see...... 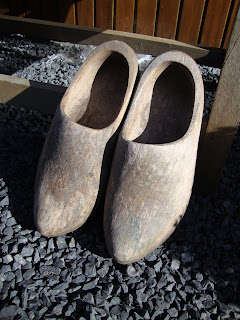 So time now to take off the wooden shoes and have a little rest before starting on the back garden. Jos and I have both been sick. We have a bad cough and Jos a nasty cold to go with it. I had lost my voice for 4 days but it is back again. This morning Jos also has an appointment at the oral surgeon to have a tooth that is crumbling extracted. The joys of growing older! 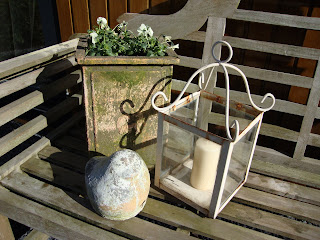 Now I await a little warmer temperatures to sit in the sunshine on my bench. The doctor told me to get outside as much as I can. Not hard with all this gardening. I am afraid my vitamin D levels dropped badly again. They have no idea why my body is not taking up the vitamin as I have been taking it for a year now but rarely have safe levels. She is now having me use oral injection boosters for 3 months to see if that will help. After three months, she is going to check the levels again and then it will either be 3 more months of injections or back to tablets. I hope I only have it for 3 months as this stuff tastes horrible. Guess this is sunshine in an injection. *grins* 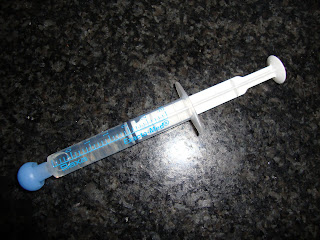 Today is a gloomy day here in Holland with gusty winds so I am going to curl up with a good book.
Posted by Heidi at 10:58 PM 16 comments: