It is that time of year...April showers have come so I thought it was a great time to show you another room in the house before and after renovations. 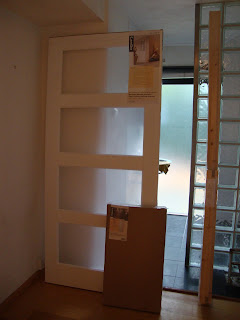 We started on this area as our first project in September 2010. The shower room had been open in the bedroom, only separated by a partial glass block wall which was open on both sides into the bedroom. The room smelled very damp as a result. Our handyman specializes in bathrooms and got stuck in removing the glass blocks. We were able to sell those right away which brought a little money back. 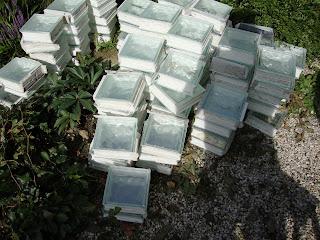 The sinks were tiny and very modern. There was one on each side of the shower itself. Attempts to sell these have failed. We already took over the mirrored cupboards to the charity shop and they told us they did not even want them to try and sell. Guess it was not only my own idea that they were awful when even a charity shop will not take them. *wink* 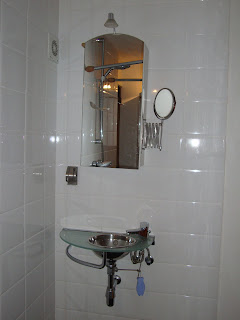 The door frame was in place and a wall was built around it. We created an opening a little wider than normal so that it is wheelchair friendly. 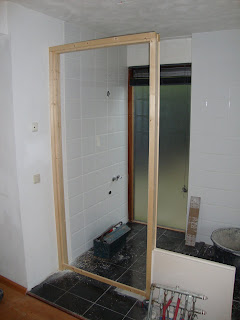 We used two of the walls as they are with the white tiles and added two new walls with a tile that worked with it. 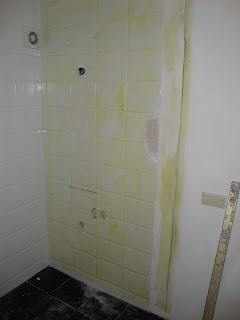 Now we have a separate shower room in the downstairs bedroom as you see from the after photos..... 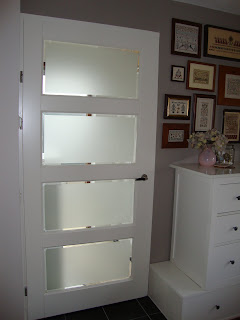 The newly built wall and small wall where the sink was is not part of a very large walk in shower. We choose tiles that have a drift wood look. They worked well with the existing tiles. I love the amount of space..... 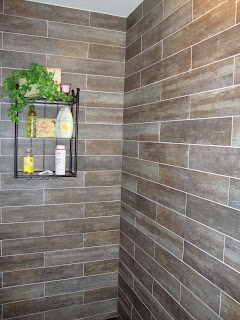 We have a rack inside the shower as this area does not get wet and we can hang our towels out of the way as well as having shampoos and soaps to hand..... 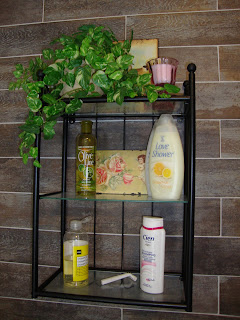 My choice was an English rain shower. I just love this kind of shower and find it very relaxing. We were able to hang it nice and high for Jos who is tall so no more ducking under the shower head for him..... 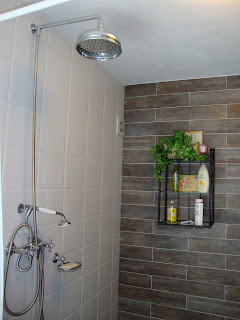 After much searching, we found a mirror in the right size that has a driftwood look to match the tiles. We have a sink that looks similar to a Belfast sink. I am still searching for a wall lamp that I like.
The window frame still has to be painted. We had originally thought we would need to get a new window installed with a portion that opens but the electric ventilation along with the ventilation strip about window work well. We are going to go ahead and have this frame painted to match the rest of our woodwork and leave the window as it is. 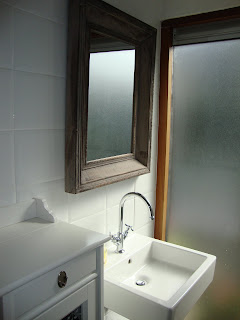 This room has come up very well and we are very pleased with it. It is a luxury to have such a large shower.
April showers are also occurring inside the house as we encounter major problems with Murphy once again. More about that in my next post.
Posted by Heidi at 8:32 AM

It does look good Heidi.
Those ghastly glass tiles are great favourites among the French, and I loathe them! I do like the driftwood look.

What a transformation. I love the drift wood tiles in your shower. Seeing the before pics makes me wonder about the former owners who liked the glass bricks and no door.

Haven't experienced a rain shower head yet and I'm curious: Doesn't the water all just plop down right on top of your head then run down your face so you can't see or wash yourself without having to step out of the shower stream? It seems awkward, but obviously you love it. Can you explain?

It really is a very nice room now, even though, Jos uses the upstairs shower more, unless he changed now.
Two of the pictures didn't work for me. To bad you didn't let that man just take the sinks, he loved them.
Love you, Mom

Whoops, never mind, they worked when I went back in.
Love again, Mom

I love this new area. Makes me want to redo our bathroom! :)

Your house is coming along so beautifully Heidi - you've both put so much time and effort into it. It's very welcoming :)

What a wonderful redo Heidi! You did quite a bit of work there. When you're all done with this house it's going to be absolutely wonderful!
Blessings,
Marcia
P.S. I loved your bedroom on the previous post.

I love your new bathroom Heidi ~ you have done such a great job and the glass in the door lets the light into the adjacent room which makes such a difference. You have achieved great things in the short time that you have lived in your new home.

Have a great weekend.

Those driftwood tiles are awesome - I've never seen anything like those! Also, love the door with the frosted glass panels. Very pretty. Great makeover!