...there's no place like home. We all have said this before. But have you ever thought about how the concept of home has evolved? Just taking a trip to the open air museum in Holland will give you reason to think... 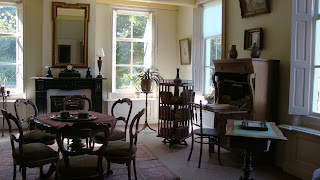 Some homes were well equipped for the well to do of the day as the photo above. They had a sitting room with ample places to sit and perhaps even a settee. But others (photo below), who had little lived a much more sparse existence. It was common for a farmhouse to actually be a part of the barn. 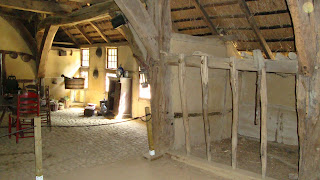 This was a very sparse setting for the family recalling more the days of the Middle Ages. 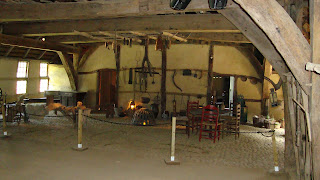 Others would have two ends of the house. The barn containing the equipment needed for the farm and housing the animals stood on one end but you could walk through to the living spaces as you can see if you walk through the door to the left... 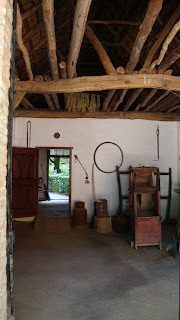 First you find the bedstees which are the beds built into the walls of old Dutch houses and farms.
They were short as the people slept sitting up thinking they would drown in their own fluids if they laid down flat. Heating? The fireplace is on the opposite wall with the furniture around it so a bedpan filled with hot coals would warm the mattress before retiring. 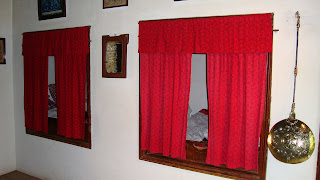 No couches to lay out on as we know today but a living space contained table and chairs. Often there was a comfortable chair to pull up to the fire and fight off the cold. Foot warmers were used too. These were decorative wooden boxes in which you placed a few hot coals and then placed your feet on the top to warm them. 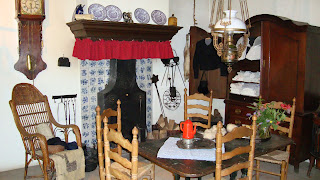 A fisher's cottage (photo below) is sparse and soberly furnished but very close to the harbor. 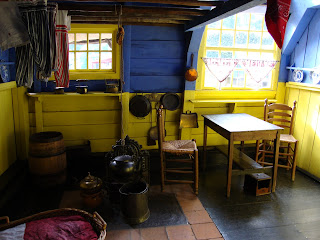 All these photos were from those I took in September 2009 when we visited the open air museum in Arnhem. You can click on the photos to enlarge them and walk back in time with me.
Wishing you all a very Happy Easter!
Posted by Heidi at 5:31 AM

I knew about the bed warmers but not the foot warmers or that the houses were part of the barn. What a wonderful museum this must be. I enjoyed the tour very much.

I don't mind living humble, we didn't have an elaborate house when I was growing up, but oh nooooooooooo. I would not want animals living in my living room.
I have been to some of your museums, so have seen the beds. They sure were short for the tall Dutch people.
I will stick to our farms with barns out in the field. Not that I want one mind you. Just the ones on Farmville LOL.
Hope you two have a wonderful Easter, and very soon an Anniversary too.
Love you, Mom
Love you

I love these pictures. Makes one realize how out of touch we have become with what really is the bare necessities of life.

very interesting museum. I am guessing there were so many details to look at that is was hard to move on to the next one.

when my children were much young, we were at the Western Heritage Museum in OK City. They had a complete dugout replica set up like a dugout home would of been around 1900, it was very humble looking.
Jimmy was about 8 and he looked in the window and said "Look, momma, they have a rug just like ours!"
it was a crocheted rag rug. We got lots of weird looks, I guess they all thought we were pretty backwards.

And I am really glad we don't share our living quarters with livestock, just our sweet puppy.

Now this is one of my favourite musea! And I wouldn't mind living on a farm ;) Got married to the wrong type of course, no farmer but a shepherd ... Well, it's too late now ;) LOL

Have some delightful Easter days at CC & hugs,
Carolien

I loved the tour, thanks for sharing the pictures. :) It really makes you appreciate all our modern conveniences. When I lived in Indiana I truly loved the Amish farms but silly me, I would want my farm animals to stay in the barn and I would have my own house.
(except for a kitty or two or a dog,lol)
Have a very happy Easter Heidi!

Very interesting to see all these pictures. We also have such an open air museum in our region. It has around 20 old houses that had been tranferred to the museum and they mainly show a lot about the farmers' housing during the last centuries.