Easter did not go according to plan for us. On Saturday, I awoke with a major rash. I have chronic urticaria due to my Hashimoto's Disease but have never had the rash this bad. Other than it being extremely uncomfortable, I just went on with my day. By the time it was evening and we had eaten, I was starting to feel worse and decided to go to bed very early with my Kindle to read. I thought the distraction would do me good. I fell asleep in no time and when Jos came to bed at 11:30pm, I woke up feeling worse and Jos said I looked worse too. I was literally a fire engine of burning rash from the back of my skull and face to the tops of my feet. But worse was the my throat was closing up. We decided it was best to call the doctor's post for evenings and weekends emergencies. She talked to Jos and then asked if I could talk on the phone. She told Jos she was sending a doctor to Cranberry Cottage immediately. But then she called back and said they decided it was not a good idea and they already dispatched an ambulance. 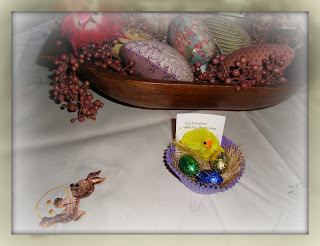 Praises to those two men that came here as they acted quickly and swiftly putting in an IV while I was laying in my bed and quickly injected medication. I had very low blood pressure and was going into anaphylactic shock. I am convinced I was only minutes from passing out so they came just in time. I was placed in the ambulance and started to improve rapidly even to the point of being able to talk above a whisper again. I thought a quick check in the hospital and I would be on my way back to the cottage.

What ended up happening was a second attack once I got to the hospital and a second injection. These injections are extremely painful for me because of my having severe fibromyalgia. In fact, the nurse had to stop the second injection and dilute it in salt water with the IV drip to get the medication into my body. The injections alone were sending me into shock with my blood pressure dropping rapidly.

They finally were able to move me into a hospital room...the last they had open and I had a third attack but it was decided not to give me a third injection as it would not be good for my kidneys.

The doctor allowed me to come home but the rash will continue for a while. It is evening and starting to burn profusely again so we are keeping an eye on it but I need to give it time. I also have to contact a couple of my specialists in my own hospital as the doctor here recommended they start to look into it more.

I was treated this morning with a little pastry in the hospital and a little cupcake liner with a chick and chocolate eggs. I brought it home for Jos to enjoy since I had the pastry. Not exactly what I had planned for Easter morning. 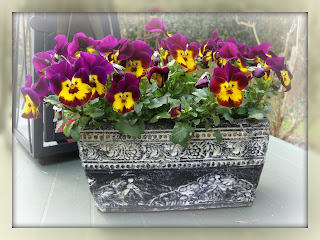 Speaking of chicks...don't these violets look like they have chick faces on them? 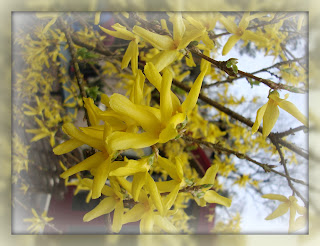 And yellow is a them in our little garden here at Cranberry Cottage in early spring.
My forsythia is blooming in full force. 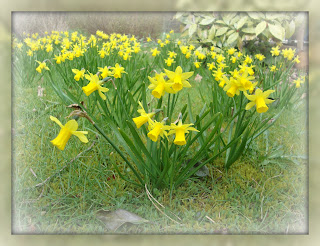 But it is my daffodils that steal the show each year with their pretty yellow dresses unfolding to welcome the spring. 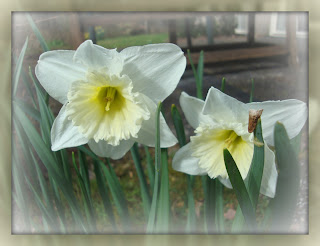 A few white ones have popped in to say hello. 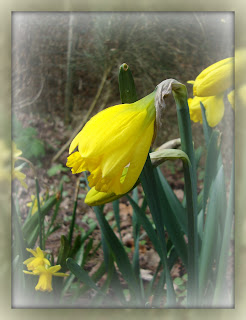 This time of year reminds me once again of the sweet children's verse by A.A. Milne...

"She wore her yellow sun-bonnet,
She wore her greenest gown,
She turned to the south wind,
And curtsied up and down.


She turned to the sunlight,
And shook her yellow head,
And whispered to her neighbor:
'Winter is dead.' "

...after all, you are never too old for some Winnie the Pooh...

Happy Easter to you all!

I was so sorry to read of your spoilt Easter. What a frightening experience. I am so glad that you were in safe hands with Jos and the medical staff, and someone else too... I trust that your symptoms will soon calm down and that investigations will find the cause.
x

what a bad day you have had, I'm so sorry. I hope you will be recovered very soon.

Dear Heidi,
I am so sorry that you ended up in the hospital for Easter. What a frighting experience. I am hoping that you are okay and will be feeling better soon. I am so glad that you had such great care both at home with Jos and then at the hospital. Hang in there my friend. I love the pictures of your spring flowers and the Winnie-the-Pooh quote. I agree...you are never to old for Winnie-the-Pooh. Here is a gentle hug from CA.

Oh my gosh!! What on earth???? Your mom will freak out reading about this, no? I pray all will be well soon. Easter Blessings, Heidi!

Bless your heart Heide. I don't know how you had the strength to write a post, but I am glad you shared with us. Please take it easy, we Ohio girls have to watch out for each other. Hugs.

Oh Heidi! It sounds like you've had a terrible time of it. I'm glad to hear you're home and improving. I'm glad you weren't home alone.

The pansies do look like they have chick faces on them!

I'm so sorry Heidi - what a scary time you've had and poor Jos and your family here in the U.S. who must've all been so worried. I hope you feel better soon and the doctors can prevent another such attack. I wonder if soemthing triggered it?

The flowers are lovely and I'm glad you can still find beauty around you in the midst of feeling awful.

Your friend in Phoenix....
Jeanne

Oh Heidi I'm so sorry that you've been so unwell but thank goodness that you had dedicated professionals around to make you more comfortable. Amongst all that you have given us some lovely pictures of flowers and a lovely poem. Enjoy the rest of Easter and wishing you a speedy recovery. Take care. P x

tBoy I just can't trust you alone on a holiday. I would have been so worried if I had known this was all going on. I hope I get to talk to you tomorrow. It is so hard now that I am nine hours different from you. I hope this all goes away very soon. Sounds like you had some very good care, maybe it really is better in the North. You always say it is.
Love you, Mom

I hope you feel better Aunt Heidi. I am sorry that you had to go through that. Happy Easter! Love you! Kristy

Okay girl...straighten out! I don't want to be reading any more crap like this happening to you! Good thing you didn't wait any longer and Jos was on the ball. Thanks Jos. You get better or I won't need that passport after all.
Love, Bull

How awful, but thankful they got you to the hospital. I'll be praying for you. I had a quiet day plans got changed.

oh Heidi, No that is not what I would of liked to do on Easter either but I am so very thankful that you got swift and good medical care.

I hope you are feeling much better by the time you read this. Sounds pretty frightening. Thank goodness an ambulance was called. May your Easter week calm down.

Heidi, I am so glad that you got to the hospital and that you are starting to feel better. My thoughts are with you. Hugs, Deborah

Oh Heidi - I am so glad that you are well! What a frightening thing it must have been. Please take very good care of yourself.

Oh, Heidi! I have had chronic hives three times (no cause was ever found), but not nearly as bad as yours! The first time, I waited it out, filling my body with more types of antihistamines than I knew existed, but the second and third time, I decided sleep wasn't that important and went on Prednisone. I'm sure you and Jos are thankful for the quick thinking of the woman Jos spoke with at the doctor's office. Please rest. I pray you will feel much better very soon.

I'm so sorry you're having such terrible problems. Hope you are feeling better soon.
Lillian
lillianscupboard.wordpress.com

Hi Heidi so very sorry to readd about all that has happened to you over the Easter and thank goodness Jos phoned and got you the treatment right away it must have been very scary for you both. Hope they find the cause soon.

Thanks for posting such lovely photos the pansies are so dainty.

Take care my friend and I think often of you and Jos.
Love Hazel c (uk)

Goodness gracious my heart nearly stopped and then reminded myself you must be a bit better if you are able to post. You are in my prayers sweet Heidi.

I'm so sorry to hear about your rough weekend. I hope you are starting to feel better. It sounds pretty scary so I'm glad you were in good hands. I'll be sending good thoughts your way.

Such pretty flowers. I hope you will not have a repeat of this past weekend!

O, Lord! That was really not your plan of spending a nice Easter weekend at Cranberry Cottage! Good acting of the nurse practitioner to call for a ambu.
Take your rest, and keep it slow! And you can always cancel a wednesday you know... You never do, but you can!

Oh no, this is not how you plan to spend a holiday, is it? And it sounds scary to say the least. Hopefully you will be recovered fully very soon.

I hope you are better now, Heidi !

Oh, Heidi!!!! Sending you such love and hugs and well wishes!!!!

Sorry to hear about your continuing bout with health issues Heidi! My poor DIL spent Easter last year in the hospital having her gall bladder removed, and this Easter she had a kindey infection. She's not in poor health, just a coincidence, I guess! But I am pleased to see that your spring garden continued on without your help. Lovely!