After another weekend of hard graft, we have the pergola project completed. Here is the result... 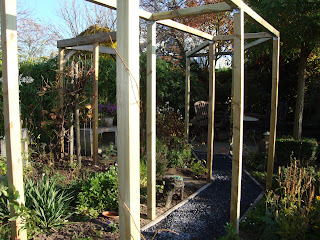 To get to this, we had to first remove the straight but very wonky brick path. I surprised Jos having removed it myself while he was off to buy the gravel chips for the path. Lifting the bricks with a spade was easy but carrying them away to stack them was not. I was so happy to be able to do that so at least it was one less thing for Jos to do.
He started by planting up the area at the end of the previously straight path. We placed some Japanese anemones and a few creeping plants such as Golden Cinquefoil in this area. 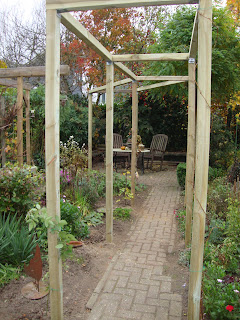 Then Jos laid out concrete bands to line the path. He also reinforced the terrace egde onto the path by laying bricks lenghtwise into the ground. After the ground was leveled and stamped down, we laid a anti-weed membrane down first. I cut it to fit and we placed some bricks down to keep it in place as we started to fill the path with the gravel chips. We choose basalt chips which turn black when they are damp. They color perfectly with the slate siding of our house. 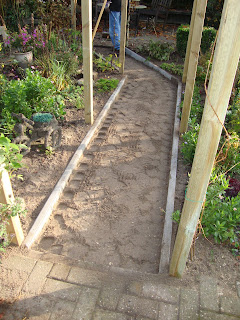 I had pulled up some bricks to change the shape of the garden. It needed some attention to bring it back to a neat sharp line. 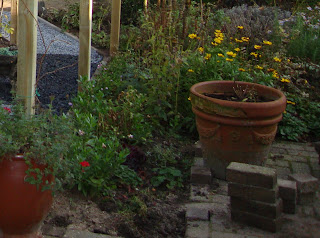 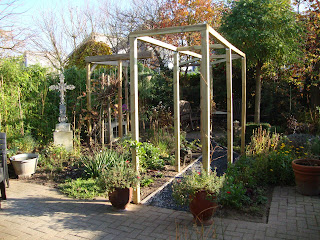 It looks like it was always in this shape now. Thank you Jos for all that hard work to make an idea I had a reality! 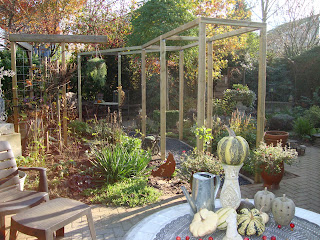 All the hard work has been worth it as it just looks so right in the garden now. While I still have a few more ideas, it is all starting to come together. Come next spring, I hope to see all the planting start to really bring a nice romantic atmosphere to our cottage style garden.
Posted by Heidi at 3:07 AM

It's going to be lovely , covered in climbers. What a good plan.

It looks lovely Heidi and so pleased Jos could get it done for you. Roll on summer to see all the climbers in flower.
Hugs
Hazel C (UK)

This will look so pretty in the Spring...what a great idea. You both have worked so hard to make your garden magical....and it is:).
Hope you are having a great week so far, hugs from CA.

All your hard work was worth it - it looks great!
Liz @ Shortbread & Ginger

That came together so well. It is perfect for the space. Jos, you did a wonderful job. Now what is the next idea in your head to make him work???? I just bet you have one.
It is going to be so pretty when the plants start going up over it. Can't wait to see it then.
Love you both, Mom

What a beautiful garden oasis you have! You and Jos have a wonderful eye for detail, and have turned this small space into something that looks much larger. I can't wait to see pictures of it next spring!

Just lovely! All your and Jos hard work is certainly paying off!

You are both so talented in being able to create something like this.

Your garden and pergola look so, so nice. Great job. The effort will pay off come Spring.

It looks so nice now it's finished, next spring will be even more exciting now. Jos has done a great job with your great idea:)

Congratulations to you both ! I'm waiting spring impatiently to see the result. Bravo !

This is going to look amazing when it is filled with plants and flowers next summer Heidi. I look forward to seeing it in all its glory.

Have a lovely weekend and keep warm.