Another garden make do... 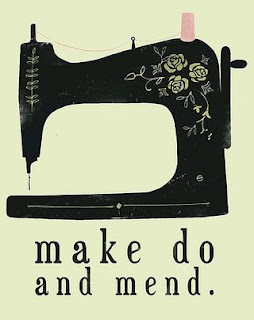 It is no weather for the garden here in Holland. It has been more autumn than summer with rain, high winds and cool temperatures. Our plants are suffering from it too. Still, I have another garden project to share which we made do with.
There was a well established grape vine in a strange place when we started changing the garden. Jos did not want to move it as he thinks it would not survive. The round poles it was supposed to be supported by were something he hated and were rotting for the most part. Two were still in tact which we used in my last make do post.
He first cut back the bamboo which hedges our garden from the neighbors. It has been left to grow on its own will taking over about 2 yards into the garden. Then the inner section was totally dead and simply rotting. The smell was awful. Jos cleaned it all up right back to the border of the two gardens. We are now adding some yew which we hope will give us a nicer green border on our side. 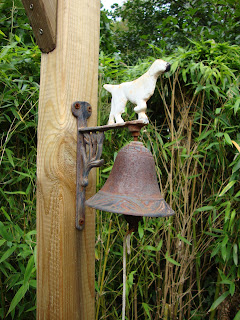 All this work left the grape standing looking quite forlorn. So I came up the idea of creating a pergola for the grape to grow against while also creating a secret area to sit. We went through what wood we still had left from our previous house. We needed to buy only three 3 meter long posts and used all the old wood and arches we had. 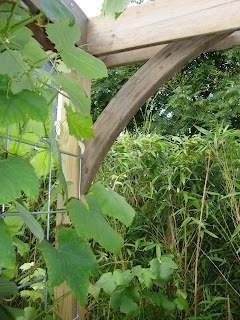 You see this view from the living room. I love the old cross which we found at a flea market. Jos mounted in a concrete block for me. There is also an old bell, which I had already and you can see in the first photo, hanging on the opposite corner of the pergola. 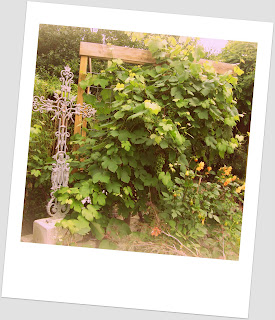 There is still a round post which we will remove in the winter season but the grape will eventually be lead up the new pergola and against the metal raster we attached. There are many grapes bunches growing which will be a feast for the birds in the autumn. 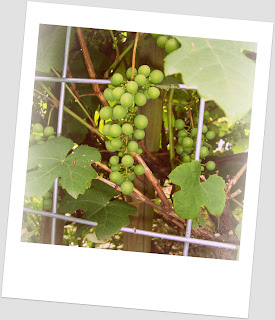 When you come around the center of the garden, you find a little area where you can sit in the sunshine (when it shines that is). Don't forget to grab a couple of pillows on your way out which are sitting in an large apple basket by the door... 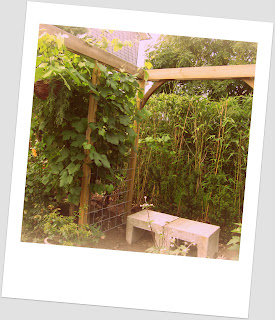 Oh I do love this Heidi! I think it would be my most favorite spot in the garden. Why don't you name it Susan's Spot?!! I have always wanted a grape vine. That is on my wish list! You and Jos did a wonderful job!

What a difference you are making to the garden, such lovely ideas.

I'll be coming with Susan to Holland to sit in her spot! :o) It's just lovely - and your weather sounds lovely too. No really, it does!

Your garden is lovely. Travis cut a bunch of bamboo as a service project last year and he said that it was very tedious work and very hard. Maybe part of it was that he was just getting used to the humidity of Hawaii but I admire Jos and his hard work. You'll certainly reap the benefit of his work when those grapes start producing.

I can't think of a more beautiful place to rest - with the grapes, the old bell, the cross - beautiful.

I'm talking to you now and hearing that you never eat the grapes. Wow, I guess you just have some happy birds then. They sure look good enough to eat.
The bell is very neat and the cross hasssssssssssss to be from a long ago grave. hummmmmmmm. Watch out on Halloween, you might get a visitor looking for their cross.
It all looks very nice.
Love you, Mom
PS: Jos, you have definitely taken over mend and make do Monday. Great job.

I love the little grape arbor - brilliant use of what you had!