The birthday of the creator of a special little bear named Pooh. Yes! It is A.A. Milne's birthday today. He was born in 1882 and had a son named Christopher Robin for whom he created the bedtime stories about a bear named Winnie-The-Pooh. And where would most children be without the joy of these wonderful tales? So many children grew up with them. 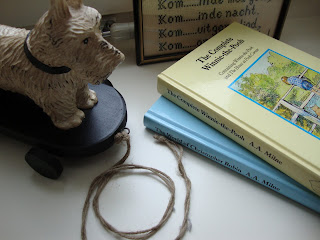 My childhood memories of Pooh were the excitement of watching an evening television special. You see, then it was only on a couple of nights in a year. My mother would have my little brother and I get bathed and in our pajamas early. You never minded at all as you were so happy that Pooh would be on. She would let us lay down in front on the television...you know that old fashioned large ones that sat on floor as a piece of furniture in itself back in the 60s/70s? We would get a large bowl of freshly popped popcorn to eat. It was put in my mother's large yellow mixing bowl and we still love those bowls to this day as she still has them. I can still smell the freshly popped corn and us just being out of the bathtub. And laying on the carpet, chin resting on your hands as you watched the antics of this funny little bear.
I sometimes wonder if my little brother has these same memories with him too?
Do you have a Pooh memory? 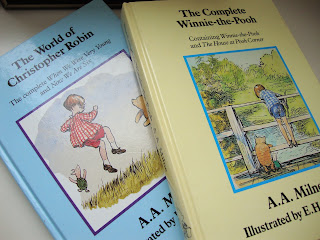 So for A.A. Milne's birthday, I decided it would be fun to get out my book The Complete Winnie-the-Pooh and read the tales again. Who can resist reading a chapter titled 'In which We are introduced to Winnie-the-Pooh and some Bees, and the Stories begin'. You are never too old to read them. It being such a rainy day, they are a perfect way to while away the afternoon. Of course, perhaps it was Christopher Robin walking up and down under Pooh hanging to his balloon saying 'Tut-tut, it looks like rain' that brought it on. What do you think? Well, just in case, here is a little Eeyore wisdom about rain...
'The nicest thing about the rain is
that it always stops.
Eventually.'
- Eeyore
Posted by Heidi at 4:43 AM

I love Winnie the Pooh too, but Tigger is my all time favorite, maybe bz I'm a little crazy myself! I used to wear Pooh T-shirts when I did daycare and the kids loved it. We used to watch all the movies on the VCR (not all at once, lol) during movie time. They're clean, classic tales that you don't have to worry about the content when your kids want to see them. My kids nicknamed my dad Grandpa Eyore too. He was a perfect mix of Eyore and Archie Bunker from "All In The Family." Now that's a scary combination! Thanks for the memories today.

A childhood favourite indeed. I can still recite many of the poems after growing up with my mother who used to say them to me as we walked.

Eeyore is a smart little character. Yes, I remember those days when you and Eric were little. (Well, you think you still are). Yes, I still have the bowls. Eric loves them also.
Silly kids.
Have fun reading Winnie again.
Love you, Mom

Travis would love it if Savannah drew him a picture but I'm not sure we'd know it was the temple, lol! She's still into scribbling. I loved the comment and it made me smile. I think I have it figured out now but time will tell!

Pooh bear is a favourite with all ages. I remember being in Monet's garden with a friend a few years ago and we were playing Pooh sticks on the bridge and a little French boy was so intrigued by us that we taught him how to play. I very often thought what did his parents think to two 60 year olds having fun.

Childhood is not only for children is it Heidi?

Winnie the Pooh has always been a favorite bear of mine, in fact the classic Pooh is sitting here watching me as I write this post...grins...I have my Winnie The Pooh book from when I was a little girl,which of course I read to my kids and still treasure, and all the pooh videos which I have watched over and over again while my children were growing up. My favorite memory though is teaching my little boy and little girl how to play pooh sticks, and they still do it today and love the memories, even though they are teenagers now.... thanks for the memories Heidi and for taking the time to remember the little things that are so special to all of us. Hope you are having a good day...Hugs...

Love those creatures all! Even bought the new DVD's even though my kids were getting too old for them, just had to have them. Don't know which one is my favorite, they all have there cuteness!

Love them! Love you! Hope all is well!

Pooh bear, I love 4-ever!! Did you know that my first car (a fiat panda) had a name... Pooh Bear :-)
And I love Pooh's quotes
'Some people care too much, I think it's called love'.
Pooh Bear

Your childhood memories of Pooh sound just like mine...and I have my mother's yellow bowl :-) I have the blue and red one too, but the green one broke years ago.
Blessings,
Marcia

I so love these stories.

Such a sweet post/tribute, Heidi! I've always loved Winnie-the-Pooh and pals. I have a BIG treasury book of tales... I just adore it. When we were in London last September the weather was so cold & chilly, while in the City I bought some cute Eeyore pink-purple plaid pajamas at Marks & Spencer's to keep warm at night at the hotel! But I love Tigger's effervescence best! Happy Days ((HUGS)) Oh, stop by my place, if you can, during the weekend–I’m having a fun Valentine Giveaway! :o)

I've always adored pooh sticks and believe that you are never too old to play....I can never resist whenever I stand on a bridge over a little stream.

Thanks for letting us in on your wonderful memories. I too am fortunate in memories of a happy childhood with the greatest mom on earth.

As for Pooh - oh my - my kids (already grown and on their own at the time) gave me the most beautiful bound edition of this amazing classic for Christmas a number of years ago. What a treasure. Since I'm a little older than you, I can't remember seeing it on TV as a child, but the tales are a wonderful childhood memory.

Such great wisdom from Eeyore...have to remember that! Winnie the Pooh stories are still just as much fun as ever, aren't they?