It was just one of those days yesterday! Everything that could go wrong DID. We discovered more problems in the house. Our handyman has made the electric wiring safe but was furious when he saw they had simply cut some major wires. He said it could have burnt the house down. He is going to see if he has time to crawl under the house as we have no power in some points of the bedroom downstairs. He thinks there is more cut but needs to see if he can find anything. If not, we will have to have an electrician come out later. But he called his father in law who is a heating specialist and he is going to work on the leaking monster I showed you in the last post. Yes, it is even leaking as well as the one like it upstairs in the cupboard holding the central heating. *sigh*

We also think the previous owners removed a radiator off in the living room where there are not connecting pipes standing up when they had the extension built. We talked about having those pipes removed but then Jos realized there is only one sunk radiator for such a large room. We are going to have the man put in a horizontal radiator where the pipes are we think. Andylynne asked if the room was larger than our house now and the answer is yes. That is why we know this sunken heater will never heat this room. We have one in our current house along with two others. 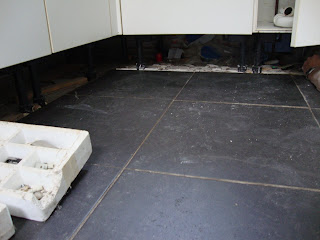 All the drains are stopped up in the house. Jos took the drain apart in the kitchen and clean it out really well then flushed the main pipe out. Then he could not get it back together and it took them forever to work on it.
In the meantime, the filthy dishwasher was removed and we discovered that a half a kitchen was laying under the cupboards along with builders rubble (enlarge photo to see all the junk under the cupboard). Jos got down on his stomach and removed everything. There was one bit of good news. They had told us that the dishwasher leaks but there is nothing of that showing in the kitchen itself. The dishwasher has food in it so we think the filters were all stopped up. Off to order a new one and a new fridge/freezer today. 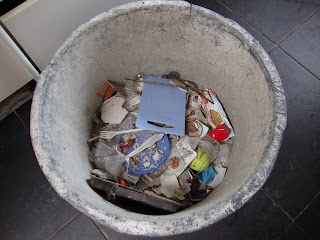 We had to hurriedly remove all our laminate flooring that is stored in the garage when the drain to connect the hose leaked water all over the garage floor. Those packs are so heavy and Jos had to move them all into the studio on his own. We took the one where the water went through the packaging out so they would not be destroyed.
I am hoping that this is the end of finding extra problems in the house. We continue to try and clean the kitchen. Jos helped me with two cupboards yesterday. In the meantime, the painters hope to get some areas done today and one of our bathrooms will be finished. I will share some before and after photos of a finished bathroom soon.....
Posted by Heidi at 10:41 PM

Oh dear Heidi it sounds like you and Jos have your hands full of problems! Hang in there...they will be solved I know but it will take some time. Think of every day as another bit of progress. I hope there are no more "surprises"!

Sorry to read you are having lots of problems in your new home Heidi and hope they will all be sorted soon and you will have a home to be proud of.

Thinking of you and Jos,
Love Hazzel (UK)

O my G! We know that, that kind of people are around us in the world, but never imagined that they lived in your new house. I hope everything will be solved. Good to hear your handyman is so involved! I love how your floor is going to be too. Great job on that guy!

There is nothing more depressing than finding dirt and problems in a new house. I'm so sorry you are having such a bad time, and hope it will be sorted out soon. It sounds as though you have good workmen.
Again I find it impossible to believe that people will leave a house in that state.

Oh sweet Heidi, I'm so sorry for all this mess. It seems to be Murphy's law over there for you right now, "if anything can go wrong, it will." The shining light at the end of the tunnel is at least when you get these things done you'll know that the house was fixed right and you can sleep peacefully with no worries about fires, flooding, etc. Hang in there and I hope things start to go well from here on out. Keep smiling.
Cindy

You will have a completely new house by the time you are finished fixing all the problems. Still, it is your home and it is fabulous!

Oh Heidi i'm so sorry you are having problems with your new house, why is it that people leave such things? When i moved into this house i'm in now we had to clean all the kithen and all cupboards inside before i could put anything away, and everytime we flushed the toilet the flushing handle would come off in our hands!!
I bet you left your previous house all spanking clean and good order too, makes you mad that others don't do the same.
I'm sure you will soon sort it out and will make it look lovely :-)

Well, I can honestly say, you have been though this all before. Remember when your Dad left only one pipe in the kitchen of the house we bought in Columbus?????
The house turned out great, and so will yours. Hang in there.
Love you, Mom

Oh, Heidi. I'm so sorry to hear of all the problems with your new house. Do you not have any recourse? I guess the good thing is you'll be able to put everything back together the way you want it.

Now I'm not the tidiest housekeeper, but what were those previous owners thinking? At least everything will be put right now and you will end up with a lovely home!

Too bad this surprise keep turning up..I'll be glad to help chasing some dirt away!

Oh Heidi, I am sorry to read about the traumas involved in moving to your new home. Isn't it amazing how much the owners can hide when they want to?

It is a lot of hard work, but the rewards will make it all worthwhile. I would be wanting to do everything straight away, but I know from past experience that it is better to tackle one job at a time and take it slowly.

....my..god.... you go girl!! (and Jos..)
This sounds like us when we bought the house in 1996.....
The first autumn it rained through the roof some places....and into the basement, a nice tiny "river" came floating in..
The previous owner denied any problems at all, - but we took them to court, and we won. We could proove that all the neighbours knew about the problems in our house.
But then the big problem started, had to dig around the house, and change the roof in the same time, - it was autumn, and it rained all the time...hurra....
Ant then, the next spring, we had to remove all walls and floors in the bathroom, - it was soaked with water in the walls....we didnt stand another time in court, so we paid ourselves.
So all I can say is: good luck!!
IN THE END - everything will be ok!