Well at the risk of very much dating myself, turn on your speakers and laugh with me at life. I remembered this song from my high school days and thought it needed to accompany this post. It has been a long time since I have mentioned my health but have had many emails inquiring so thought I would place an entry about how things are. I have been to the hospital three times this past week for various appointments. I had to see a neurologist as my endocrinologist wanted me to see him since she thought I have carpal tunnel in both hands. After an hour and half of examinations, he told me that it was not carpal tunnel. I had expected that as I have pain in both my hands and my feet. I also have major itching all over my body. I have generally not been feeling like I have control again which was how I felt back in April before my thyroid stopped working. He told me that I have a rare side effect from Hashimoto's disease. Pain is common but the itching is from the antibodies my body is producing attacking the small nerves around my entire body.

I then saw the endocrinologist again and she told me that I do have Hashimoto's disease but that my thyroid levels are rising once again. I need to increase my dosage of medicine again. That explains why I have felt like my body was out of control again and also becoming very cold. Poor Jos has had to put up with me turning the heat up. He keeps wrapping me up in blankets so he can turn it back down.

Good news for two things. My neck has reduced by one full centimeter since I had the radioactive therapy. Woohoo! I also have two asthma medications I take now as I have a chronic airways infection that are really working well. I can even take walks again without coughing and gasping for air.

On Monday, I have yet another visit to the hospital to go to the dental surgeon. We had this planned for last January but I had to put it off because of the breathing problems and coughing. It now can no longer be avoided. I am not looking forward to it. He has to remove a molar that a very bad dentist damaged. It has been infected for four years and I am scared as to what he will find when it gets it out. I am hoping the jaw bone is not affected. 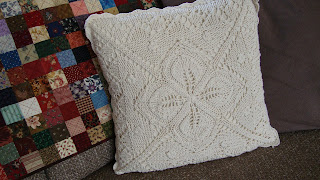 Now on to something bright and cheerful and new in my living room. I found these pretty pillow covers in a discount store here in Holland. I love them! They are cream which works so well with my cocoa brown couches. They stand out nicely again my quilts also. Currently, I have a charm (postage stamp) quilt I just finished laying over the back of one of the couches. It is fun to come across something like this since I don't crochet myself. 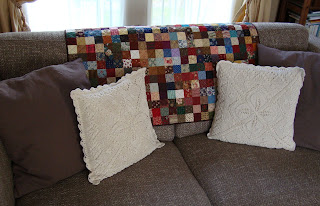 I hope you are all having a wonderful weekend? It is a rainy autumn weekend here. We took a drive to look at the leaves today. It is so bright and colorful against the grey skies. Just breathtaking.
Posted by Heidi at 1:09 PM

Now, I really want to go bla bla bla bla, cause I HATE HEARING YOU ARE NOT WELL. Enough is enough. You tell those doctors to get you well. Geesssssssssss.
On a nicer note, I mailed you a package which you might get tomorrow or Tuesday.
Hope you like your JUST BECAUSE.
I love those pillows. They look hand made. I like seeing more of your new couch too. I haven't ever seen you put your couch in front of the french door.
Your quilt looks so cute in the center.
Love you, Mom

Hi Heidi
You have such an amazing attitude considering all the medical problems you have had to put up with. I hope the dentist appointment turns out to be just a routine procedure,no complications.
((hugs)) Rhondi

Heidi,
I know it must feel like one step forward and two steps back but things are improving albeit slowly. It's good news that you have a diagnosis on the Hashimoto's condition, at least now they can begin you on an appropriate course of treatment and good news too on the improvement in your neck.

Getting the dose right for a thyroid condition is very hit and miss at the beginning but, once it's right, the improvement is dramatic so, my dear friend, it''s patience, patience and even more patience :>)

I love the cushion covers, they are neutral enough to show off the other furnishings around them but they also have lots of additional interest in their pretty crocheted design.
Have a great weekend.
Hugs Angela

Sorry to read about your health problems and do hope the dentist will not be to painful for you, you have been so courageous this year Heidi I really do admired you for keeping so cheerful.
Love the postage stamp quilt.
Keep smiling and enjoy the Autumn colour.
Hugs Hazel (UK)

You are having a hard time righ tnow Heidi, I'm so sorry.
I often think how your mum(Nancy) must feel, reading your blog, as my daughter lives in Canada, and it feels very far away.

Hi, Heidi! Thank you so much for giving us this update. I've been wondering how things have been going... I'm sorry things are a bit of a mish-mash regarding your health issues and that you're now doing so well and having some difficult days. Lovely you have Joss's support. :o) And your upbeat attitude is to be applauded. With multiple issues it can be so hard to get correct diagnosis. I do hope and pray all will go good from here know you know what's what. Thinking of you and sending you healing vibes and ((BIG HUGS))...keep us posted when you can. And LOVE those cushion covers! :o)

Hi Heidi...I'm so sorry you are still suffering with these health problems....you are always so up beat and just pushing forward that I tend to think all is well. I'm glad you have good doctors and a sweet hubby who gives you lots of TLC...I hope all goes well at the dentist.
Your new pillows are so pretty, they do look handmade and really look nice with your wonderful quilt. I love all the tiny pieces...pretty, pretty. hugs to you, Linda

I hope the end of this year comes quickly for you, Heidi. Hopefully many of your health issues can be worked out by then. Why can't we just change the batteries when they start to run out or wear down?

Your positive atttitude is admirable and it sounds like Jos is a gem. My thoughts and prayers are with you.

I too love your new pillow covers. They derinitely look handmade and add to the ambiance of your gathering on the sofa.

Hi Heidi! It's been ages since I've visited you and then found that you'd moved! Love your new blog ... I've changed my bookmarks so I can find you again.
I'm sorry to hear that you're still having health problems. I hope the doctors are able to get things under control soon.
Those pillow covers are adorable!
Anyways, it's nice to be back visiting everyone again.
xo,
Lynda

Cindy at her Country Home said...

I just discoverd your blog from a list on another of my favorite blogs. LOVE your photos. Also really love the wreath that is your header photo. Did you make it? Is there a pattern?

'spring collection - just another little girl with stars in her eyeyeyes' I love the Vapors. I love that song, and your choice.

Now to the serious stuff. I am so sorry you are going through all this Heidi. I wish I were closer.

I will keep you in my prayers. I don't get to read blogs like I use to. I am at the library because I no longer have a working computer. I have been out looking for work and because I just need to get out of the house. I hope to be blogging again one day.

I'm interested in your update Heidi, just sorry that you have been going through more thyroid stuff! Hope they soon have your meds. regulated - meanwhile tell Jos to keep piling on those blankies!!

Sending get well wishes - hoping the dentist is gentle and you will not have further problems with that molar.

Heidi, hope you start to feel 100% real soon. Will keep you in prayer. I love the pillows on your chocolate sofa. I just bought a new sofa of the same color. Still adapting to the darker color but I just love it. Stay well. Shirley

I have Hashimotos too, and stupid doctors, My hand is doing the same thing, didnt even think that it may be due to my thyroid levels, I have my annual doc appt next week ,,ANOTHER different doctor..YIKES,...
Love those pillows too, so glad I found your blog,,love it